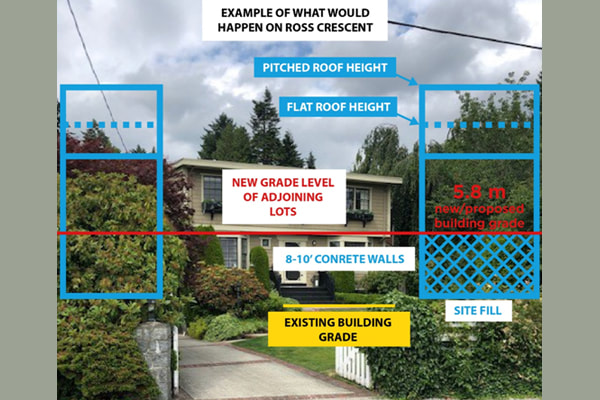 We are writing you to ask for your support in defeating a misguided District of West Van (DWV) planning initiative that is pushing to raise the level OF THE MAIN FLOOR ELEVATION of all lower bank DWV lands throughout the District to a 5.8 METRES Geodetic. This is essentially 19.3 feet above sea level (this is approximately 11 feet higher than the existing natural grade), and significantly above current grade levels most homes are built to.  A copy of the 4358 Ross Crescent application is attached for your review.

Most existing and newer homes built in lower bank areas within the DWV and in our area close to the Waterfront are built to levels of 2.5 -3.7 Geodetic respectfully.  There is a development application that contains an engineer’s recommendation of 5.8 meters – a level supported by the DWV staff – which could become a precedent for our neighbourhood.  We believe the applicant was originally directed by Staff to apply at a 4.7m, and then were re-directed to apply with a 5.8 Geodetic, this is not how civic policies work.

The report attached with this letter makes assumptions and Sea Level Rise (SLR) projections that are completely fictitious not based on any real data.  The NOAA last 100 years actual data of SLR as measured at Point Atkinson was a mere .0389 of one foot, ie: less than 4” OVER THE LAST 100 YEARS. We have provided a link to the NOAA data on SLR for your review confirming the above.  The NOAA in the US has best records of Canadian tide gauges and reports include tide water levels at Point Atkinson, West Vancouver.
https://tidesandcurrents.noaa.gov/sltrend/sltrends_station.shtml?id=822-051

There have been floods in certain DWV neighbourhoods, including our area, but these were caused by DWV’s antiquated Storm Sewer systems not providing adequate drainage.The flooding to date has all been from ground water confirmed by recent lab testing, ie: NO SALT WATER.  Raising the building and grade of lands to 5.8 geodetic will not solve the flooding from ground water, it will just make it worse.

Most homes built to a 2.5 -3.7Geodetic if the 5.8 is approved, will soon have 6-8 feet high concrete walls builtalong each property line as properties are redeveloped. This includes properties along the water and also across or near the water.  Just imagine looking into an6-8 feet concrete wall on either side of your property! Your property will essentially become a bathtub with water run off from the higher property dumping down into your property resulting in flooding.

The agenda of raising building grades by DWV to 5.8 Geodetic from the current standard of 3.7 Geodetic will be disastrous to neighbourhoods and home owners and doing nothing to address the real issue of recent flooding, WHICH IS ALL RELATED TO THE INADEQUATE AND ANTIQUATED DWV STORM DRAINS NOT ABLE TO HANDLE THE SURFACE RUNOFF OF RAINWATER/ SNOW MELT, RESULTING RISE IN GROUNDWATER TABLES. THE STORM DRAINS SYSTEM NEEDS TO BE UPGRADED.
In addition, DWV is attempting to designate lower bank lands near the waterfront, such as Ross Crescent, Stearman, Erwin, Evergreen, Ferndale areas FLOOD PLAIN ZONES! It could result in homes in these areas to be uninsurable.  By designating these areas as Flood Plain Zones, the DWV can write their own building by-laws such as reduced side yard set backs, building height, etc.

The Province of BC and the City of Vancouver have both spent hundreds of thousands of dollars studying the same SLR issue to determine what would be best. After much study, both The Province of BC and City of Vancouver recently adopting a Geodetic of 4.6. This is a reasonable position backed by significant study from credible/reputable engineers. It is what should be adopted in DWV.

Why DWV feels a need to increase this to 5.8 Geodetic (19 feet), which is based on the result of the Ross Crescent Applicant’s engineering report  is bewildering to say the least as the City of Vancouver and Province of BC are all on the same body of water.  In addition, the Ross Application is asking for a significant number of variances, including side yard, front yard, rear yard set backs and also height relaxations, many of which they claim are needed due to the increasing Building Height level to 5.8 Geodetic.

We urge you to write your councillors ASAP on or before this Friday July 12th in protest rejecting the above Ross Street application, which if approved will set a new precedent for all future applications. Please send your letter of objection to mayorandcouncil@westvancouver.ca.